The Big Ten is now the Big 14 with the new additions of Maryland from the ACC and Rutgers from the Big East. However, was it the right call for Maryland, and Rutgers to join the Big Ten? 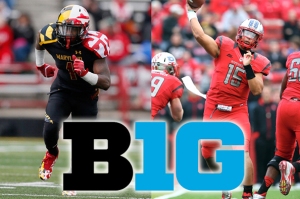 Before Maryland’s divorce from the ACC, they had been a part of the conference for 59 years and developed rivalries with North Carolina, North Carolina State and Duke in basketball. The large part of Maryland’s move dealt with the university’s latest financial struggles and saw that the increased revenue from the Big Ten Network that could save them. Perhaps the biggest difference is that Maryland is known more for their basketball tradition, as the Terrapins have won just one ACC football title since 1985.

Rutgers is expected to announce the move Tuesday from the Big East. From a football standpoint, Rutgers appears to be a better fit because of their recent success. Rutgers is currently 9-1 and number 18 in the BCS. Since 2006, Rutgers has had only one losing season, and has five bowl wins. Plus, only Ohio State and Michigan would have had better recruiting classes than Rutgers a year ago.

Big Ten commissioner Jim Delany told Sports Illustrated that with the move of adding Maryland and Rutgers, the conference hopes to add offices in the East. The Big Ten obviously wants to shift its regional power from the Midwest to the East by adding the two Eastern schools, and add viewers for its Big Ten Network. Sports Illustrated wrote that Maryland and Rutgers move to Big Ten could bring in $200 million in television revenue.

However, was this the right call for both schools?

I can see the move makes more sense for Rutgers as the Big East isn’t as nationally recognized. Rutgers and Louisville are the only teams ranked in the BCS standings, 18th and 20th, respectively. The Big Ten has two teams that are ranked in the BCS standings and one team, Ohio State is undefeated, but cannot compete for a title this season. The Big Ten also has a championship game and is more well known for its football tradition.

As for Maryland, I am confused with this move. The move to the Big Ten was definitely a financial move.

It has to be disheartening to the fans of the school that have enjoyed the teams history in the ACC. For Maryland, it may be a bit awkward the first time they play Duke, UNC, or N.C. State the first time in the ACC-Big Ten Challenge.

The moves also mean that Big Ten conference foes won’t get to play each other as much as they will have to travel more and may hurt the other Big Ten team’s recruiting classes from the East Coast.

The move of Maryland and Rutgers will likely only make other teams think about switching conferences and make conference realignment a popular subject over the next few years. In fact, now Boise State, San Diego State, and Brigham Young are thinking about staying in the Mountain West after saying they will join the Big East next season. Who knows, Notre Dame may finally join the Big Ten now.

However, it is obvious that college football is leaning towards creating superconferences.

Error: Twitter did not respond. Please wait a few minutes and refresh this page.

The official blog of the Green Bay Packers

"I Said I Don't Know."--and Other Answers to Hard Questions

the road to there

playing under the table and dreaming

Journeying From Broken to Bold

living and running in the windy city

When in doubt, eat a sprout.

Discussing the Music of the Post-Grunge Seattle Scene, film & TV of the post-postmodern era and more.

Discussion about EVERY sport!